In the next three years, European financial services markets will face a transition unparalleled in the 20th century. Banks and financial institutions that intend to compete in Europe are overhauling their strategic plans to excel in a new environment as the 21st century rolls around.

What is this new X-factor? European heads of state agreed on May 2, 1998 that a single currency, called the euro, would replace the national currencies in 11 participating countries. On January 4, 1999 (after the New Year holiday), a European Central Bank will assume full responsibility for setting monetary policies for the group, which has come to be known as Euroland, and conversion rates between participating currencies will be fixed irrevocably.

For a three-year transition period, national currencies and the new euro will coexist, allowing market participants to choose freely between them when effecting a non-cash payment -- referred to as the "no compulsion, no prohibition" principle. Euro notes and coins will be circulated at the beginning of the year 2002, when national currencies will cease to exist altogether. Starting on June 30, 2002 at the latest, the euro will be the single currency of the European Economic Monetary Union (E.M.U.).

Overall, the introduction of the euro will create some difficult strategic choices for financial institutions active in Europe. For the big banks, this means a need for growth, possibly rounded off by consolidations and a withdrawal from unprofitable business fields, as well as a repositioning in retail banking. For the retail banks from the savings and cooperative areas, consolidation and concentration will be inevitable. The pace, however, will have to be accelerated.

We expect that the German and other European banking markets will be dominated by four major trends under the influence of the E.M.U.:

The start of the European economic and monetary union will have extensive direct and indirect implications for the financial services sectors of the participating countries. While each country has its own peculiarities (e.g., Germany's predominance of nonprofit and cooperative institutions in retail banking and its complex interrelations between financial and manufacturing sectors), all participating countries will feel some impact.

All key political decisions for the E.M.U. have by now been made, and the first head of the European Central Bank has been chosen: Willem F. Duisenberg, former president of the Dutch National Bank. The core pioneering nations are Germany, France, Austria and the Benelux countries (Belgium, the Netherlands and Luxembourg). Other participants are Italy, Spain, Portugal, Ireland and Finland. Staying outside the union for the moment are Britain, Sweden, Denmark and Greece.

However, the ultimate impact of monetary union on national economies and their financial sectors remains somewhat uncertain. How, for instance, will countries that have traditionally had inflation rates higher than the "hard currency" core countries adapt to the loss of the "devaluation valve" in the long run? Will increased competition revive protectionist instincts at the national level?

The banks have to take certain intuitive strategy elements into account and allow sufficient flexibility in their strategic behavior.

ACTING AS A CATALYST

This uncertainty means that banks are limited in their efforts to exactly define their strategies in advance, though certainly the initial results of the transition will include these:

Beyond these, a multitude of indirect implications for demand and supply of financial products and services will result: new dimensions of market depth and economies of scale; increased market transparency; decreases in national loyalty, and the loss of the national home currency advantage. More intense competition will catalyze and accelerate trends in the financial services market throughout the group.

WHOLESALE BANKING ON THE FRONT LINE

In wholesale banking, the transition to the euro will take place on January 1, 1999. From that date on, trading and settlement on all major exchanges within the group will occur in euros, and most transactions between banks will be in the new currency as well.

In general, the single currency will standardize financial products within Euroland, make financial offerings more comparable and reduce costs for cross-border transactions. This will, in turn, increase competition and reduce margins within Europe, resulting ultimately in industry consolidation and centralization. In the end, we will see a financial sector in Europe that will resemble that found in the United States much more than it does today.

Exhibit I shows how the E.M.U. will affect the key strategic business areas within wholesale banking.

EFFECTS ON MIDDLE-MARKET AND RETAIL BANKING

Unlike transactions in the wholesale segment, the retail segment will not be obliged to shift to euros (in the form of coins and notes) until the end of the three-year, dual-currency transition that will start on January 1, 1999. However, everybody has the right to change to the euro for non-cash transactions and position-keeping as early as January 1, 1999 under the "no compulsion, no prohibition" rules.

As in wholesale banking, the monetary union will have a catalytic effect on the private-customer business. Lower market-entry barriers, intensified competition, higher price pressure and greater transparency will intensify competition in the retail segment. The traditional products -- unchanged except for the new label "euro" -- and the familiar banks will have to stand their ground, competing against new players and developing innovative ideas.

The larger size of the Euroland market will create the opportunity to address segments that were previously too small for specially designed offerings in local markets (e.g., upscale investment services aimed specifically at European, highly mobile expatriates working for large multinational companies). United States and British providers such as Citibank, Barclays and Abbey National have been "cherry picking" promising European customer segments by addressing niches not as a series of small national markets, but rather as one single Euroland market. This trend will continue and may ultimately lead to significant market-share losses for the traditional domestic banks.

However, due to the generally more parochial characteristics of the retail market, and the persisting linguistic, psychological, cultural and legal/regulatory barriers to cross-border banking for the majority of private-bank customers, the impact of the E.M.U. on retail banking will be felt somewhat later and may arrive in a more mitigated form than in wholesale banking. (See Exhibit II.)

SCENARIOS FOR GERMAN AND OTHER EUROPEAN BANKING

Increasing price and cost competition will initiate strategic reorientation in institutions all over Europe. (See Exhibit III.) Moreover, the need for capabilities upgrading will arise and foster cooperation in back-office operations and securities processing.

Some of the more notable implications include:

* No German or European bank can expect a priori a secure E.M.U. position. Few of the big German and European banks have future-oriented strategies in place that fully anticipate the challenges posed by Euroland.

* The local retail players (savings and loans associations and cooperative banks) will largely sustain their market position in the traditional branch business, but need to proactively manage costs through cooperation and mergers.

* Niche players (in terms of products or geography) will be facing a strategically difficult situation. They will be able to stand their ground through cooperation and mergers at least in the medium term. However, many will focus solely on core businesses, such as mortgages.

The E.M.U. will force financial institutions worldwide to adapt their capabilities. Yet institutions within the union have a mixed history with executing changes. Historically, for example, German banks, fearing the implications of staff reductions -- due to the complex interrelationships of the financial services providers with each other and with other sectors of society -- have had difficulties in mastering changes successfully. This time, the imminent effects of Euroland will leave them no choice but to act forcefully and dynamically.

Topics: banking, economics, pricing, strategy, payments
Get s+b's award-winning newsletter delivered to your inbox. Sign up No, thanks 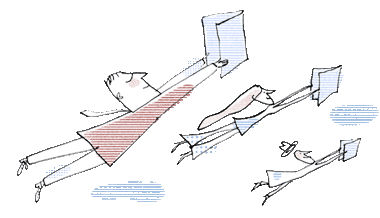